April 17th I closed my shop for three weeks packed a small travel bag and headed off to Europe with my husband, brother and sister-in-law.  Chris, Mark, Elisa, and I were on a mission; to retrieve my niece Amy from her college term in Florence, and to see as much as we possibly could in an impossibly short period of time.  We successfully retrieved Miss Amy (it wasn’t easy, for she was deeply entrenched) and we did manage to see so much, yet not nearly enough……
Our two and a half weeks in Europe nearly seems a dream, but not quite.  Looking at the many photos brings it all back to life.  What an incredible time we had. If you follow me on Facebook, you may have already seen some of these photos.   I think I will break posts up by city and I’ll go light on descriptions, giving you a link or two you can click on if you want anymore info on something.  : )
Late on the afternoon of April 20 we arrived in Florence, Italy.  Oh, my gosh!  What a beautiful city in which to begin a holiday in Europe. 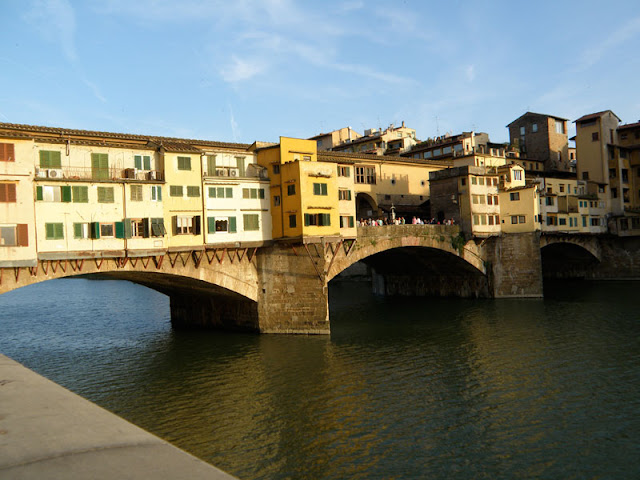 The Ponte Vecchio illuminated by the setting sun.  We could walk out the front door of our hotel, cross the narrow street and this famous landmark was less than 400 feet away to our left.   This ancient market bridge is mentioned in documents as early as 996, and was the only bridge in Florence not destroyed by the Germans in WWII. 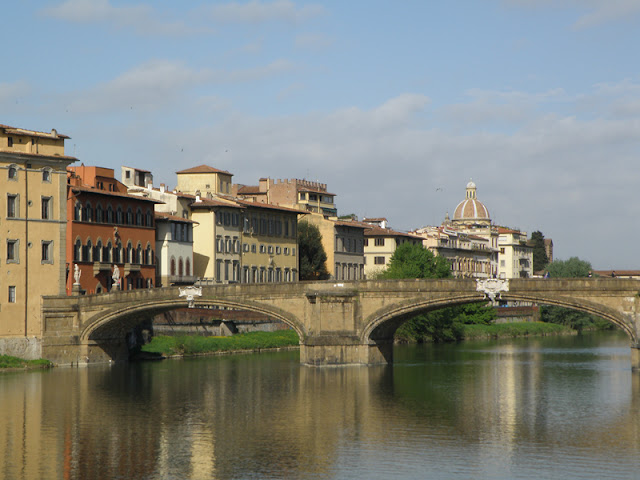 The view to the right and the next bridge downriver, the Ponte di Santa Trinita.  This bridge was virtually destroyed during World War II and then painstakingly reconstructed after the war. 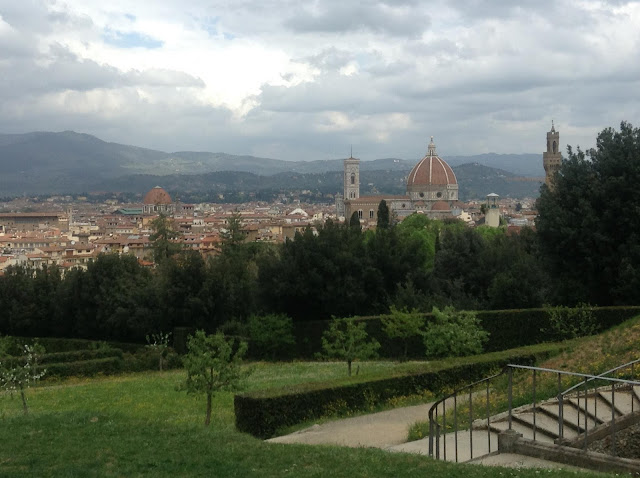 The view of Firenze from the Boboli Gardens of the Palazzo Pitti.  A lovely city…. 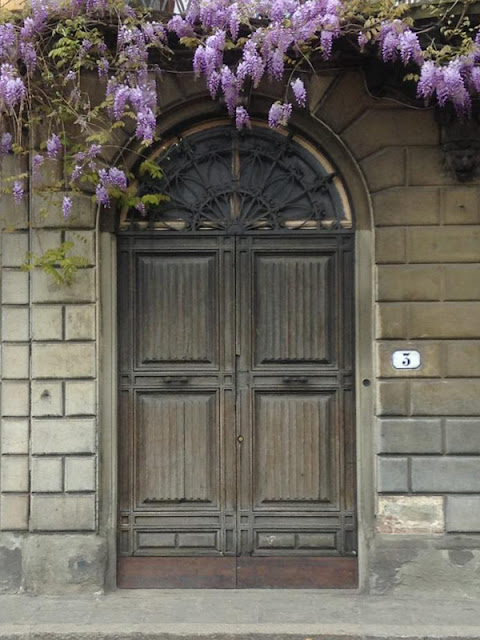 One of the many striking, large entry doors we saw in Europe. Several family members were besotted with large doors, running here and there snapping photos.  : )   This is one of my favorites.  Love the wisteria! 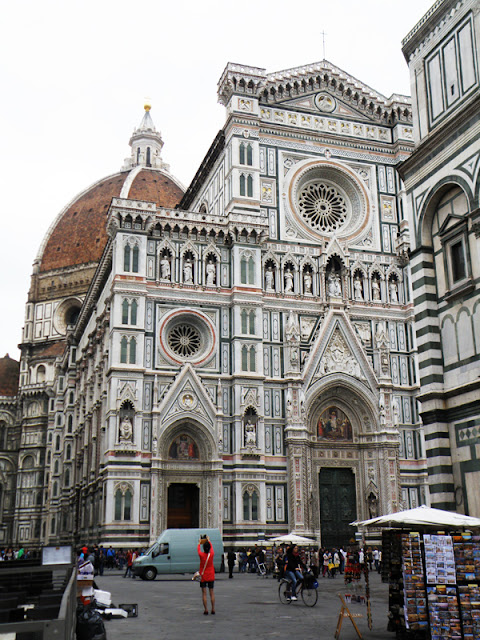 The Basilica di Santa Maria del Fiore, or The Duomo as it is usually called.  What a complex!  The basilica was begun in 1296 and completed structurally in 1436 with the dome engineered by Filippo Brunelleschi. The exterior  is faced with marble panels in shades of green and pink bordered by white.  My photo taken on a quiet, gray morning does not do justice to the colors of the marble.  So impressive and precious.  (Can you even begin to fathom how much this would cost today???   I would lose track of all the zeros.)  The dome remains the largest brick dome ever constructed. 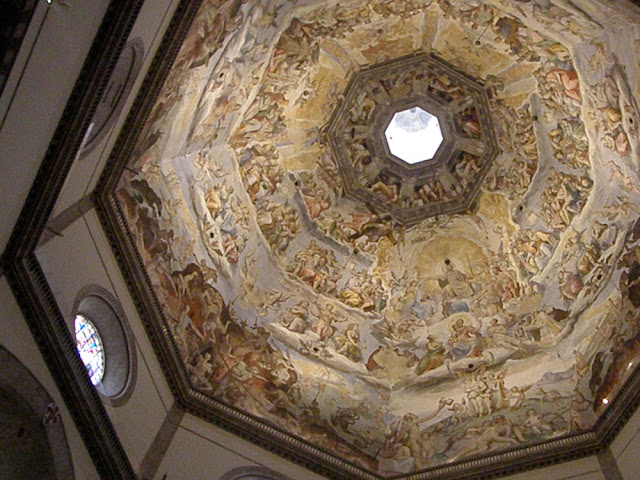 My family climbed the 463 steps to the top of the dome to see the Duomo’s fresco and take in the view of the city.  An angry knee caused me to abort the climb, and I made my way back down where I was allowed to join other tourists on the ground floor.  The inside of the cathedral is so quiet in color and design compared to the outside, except for the fresco up in the dome.  The fresco depicts the Last Judgement and is one of the largest paintings of the Renaissance.

I spent a lot of time looking up in Europe; paintings on ceilings and inside domes, fabulous architectural details…. You miss so much if you don’t stop and look up. 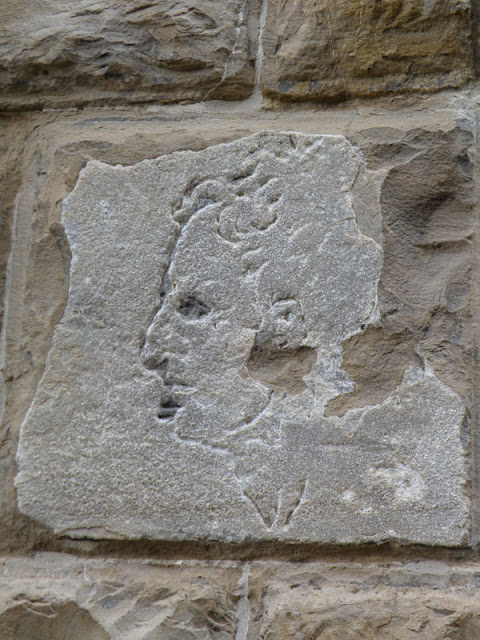 Michelangelo’s graffiti!   One person I wanted to become better acquainted with in Florence would be the master, Michelangelo.  Above is one of the master’s smaller sculptures, a small etching of a man’s profile carved into one of the massive stones in the Palazzo Vecchio (The Old Palace).   This is the only sculpture by the master you can actually touch.  There are several stories about One version states that he etched his profile into the stone with his back turned on a dare. Another variation has it that he carved the mug of a particularly hated acquaintance (a thief) so that Florentines would never forget the man’s face. and then there was David.  This is a photo of the little David, the reproduction now standing where the original stood from 1504 to 1873.   We visited THE David at the Accademia Gallery.   What an incredible piece of sculpture.  17 feet tall.  Michelangelo created David in three years.  Three years!  From a piece of stone came something so extraordinary.

We spent three nights in Florence and I needed at least three more in order to see all that I hoped to see. I guess I’ll have to go back.